Would a Hero King really work? 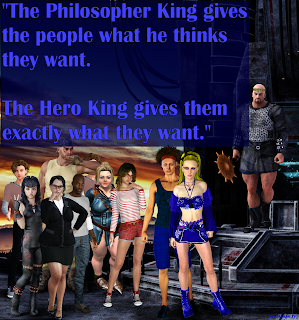 A growing movement worldwide is the concept of the "hero king" as a system of government. The concept is simple- a country is ruled by an absolute monarch, but that monarch follows the advice of their people and enacts new laws accordingly. The idea is sold as the "perfect hybrid" of democracy and absolutism, as the concept replaces democracy's burdensome bureaucracy with someone who can enact laws quickly and decisively, while blunting the absolute aspects because the monarch must still listen to what their people want.
How exactly this will work is an open question. Will the heroic monarch have free reign or will they have some restrictions or other checks and balances imposed on them?
If it's the former, then you are relying on the monarch to be trustworthy and honest all the time. Considering how hard it is to find a single politician with those attributes, how can we be sure a monarch will be any better?
If it's the latter, then no matter what system you impose, the monarch's decisiveness will be blunted. This is because the monarch will have to always face the "wraith of the rules", either because there will be laws the monarch may wish to enact but can't or because the monarch must always deal with the ongoing threat of their people disagreeing with them to the point of facilitating the monarch's removal.
Sure, there will be those who will point out those checks and balances are vital to ensure the monarch does precisely what the people want...but, that's what happens in a democracy anyway, so what's the difference?
The hero king seems like another ridiculous concept cooked up by anti-democratics in a vain attempt to find an "alternative" when it's increasingly clear there is none. Democracy has many issues, but it's lasted the test of time because it works, and, really, there is no alternative. In an increasingly global world where more and more are able to field their voices, doesn't it make more sense to give power to those voices instead of taking it away?
Posted by Vicendum at 10:16 PM
Email ThisBlogThis!Share to TwitterShare to FacebookShare to Pinterest
Labels: Artwork