Do The Leonids Exist? 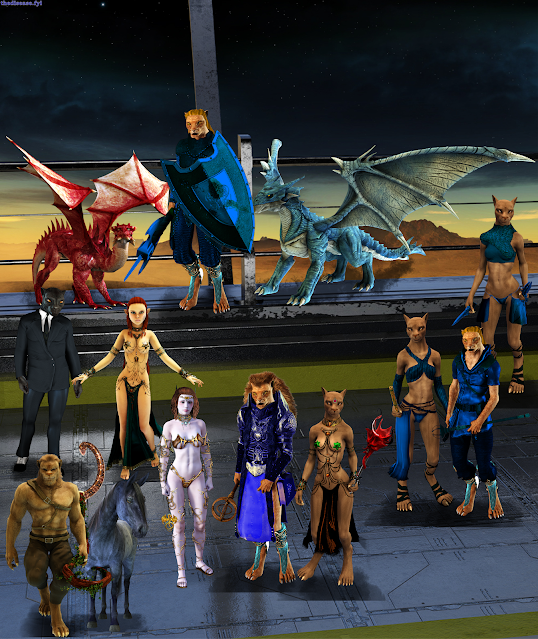 A picture is usually worth a thousand words. In this case, it's worth a million.
In his book, The Lost Legions (published AD 112), Drassus tells the tale that main reason why the Romans lost the Battle of Teutoburg Forest (AD 9) was due to the fact the Germans were allied with a people Drassus called the "Leonids". In his book, Drassus claims the Leonids were actual "lion-human hybrids" who had a kingdom based in what is now Moldavia, although scholars- even at the time- suggested they were more likely warriors who wore lion-inspired garb.
Still, the image of "lion people" greatly captured the imagination of Classical Rome, inspiring many plays, sculptures and other pieces of art, as well the appearance of many gladiators who fought as or against "lion warriors". A few Classical Romans even mention of meeting with real Leonids during this era, always placing them in Moldavia. Mentions of the Leonids persisted until the early 11th century, where the Byzantine chronicler George Pasos writes that Basil II massacred the kingdom's inhabitants after they allied with Bulgaria.
However, no known Leonid-written documents exists, and during the Severan Empire period where Rome briefly established rule in Moldavia, there exists no records of the Leonids interacting with the Romans or even any hints of their existence. Thus, their existence had long been dismissed by modern scholars who assumed they were merely a tale of "Classical folklore", as no credible evidence of their existence surfaced.
Until now.
The above is a picture sent to me by an unknown contributor. The possibility is there that it is doctored, though every examination I give it tells me this is genuine. I can't quite place the setting, although it appears to be in the Hoggar Highlands, near Tepitilan.
If that is the case, then they must have some arrangement with the Casaran government to have them housed in their territory. That they would seek refuge in the Casaran Empire isn't extraordinary, as the Casarans are known for being extremely welcoming of refugees from all areas of the world.
The question, though, is "what are they doing?" The Casarans aren't known for their secrecy, but they've managed to keep the existence of the Leonids in their territory a secret for quite some time. I can't imagine the Casarans have nefarious designs on the Leonids because that's not in their nature, but they have to be up to something with the group. If the Roman chroniclers were correct, the Casarans are dealing with some of the strongest warriors humanity has ever seen- Casara is definitely going to put them to use.
That's just the beginning, though. So many other questions abound, such as who the two fully human women are, who the panther-man in the business suit is, what's taking place in this picture, what the two winged creatures at the top are (dragons? Really? How?)...my brain hurts just thinking about it.
I'm going to stop here but...this is a story to follow up on.
Posted by Vicendum at 4:17 AM
Email ThisBlogThis!Share to TwitterShare to FacebookShare to Pinterest
Labels: Archives, Artwork