BUFFALO, NY- The Roman "experiment" in North America has officially come to an end, but it's not the good news the continent was hoping for.

The deal sees no actual transfer of territory between Rome and Virtue, as Rome gets to keep the North American territories it has directly annexed to its Empire (Roman Columbia, Roman New York, southern New England, Texas, the coast of the Gulf of Mexico, Florida and Alaska). Furthermore, the actual day-to-day administration of the NAU and Australia will be maintained, as the agreement pledges to maintain of the levels of autonomy the NAU and Australia currently enjoy.

The only difference will be that instead of a Top Protector and a Roman Prefect overlooking Australia and the NAU (respectively), the roles will be reversed, with a Top Protector overseeing the NAU and a Roman Prefect will oversee Australia. It is not known when both will be formally appointed, but it's expected that the transfer of military bases between the two continents will take months at the very least.

On the surface, the deal looks good for all sides. Though the Australians never clamoured for the Romans, Australia's acceptance of the Virtue Protectors was lukewarm at best. On the other hand, the people of the NAU had been very vocal about joining Virtue, and Virtue never shied away from reciprocating their interest.

Virtue, you may recall, was formed in response to Rome establishing the NAU in the first place following the collapse of the United States of America in 1994.

So, for Virtue, being able to formally accept the NAU into the Federation is a major political win.

For Rome, they never seemed comfortable with establishing themselves in North America. They only pursued the arrangement as they were longtime allies of the USA, but, as soon as they arrived, they found the institutionalized morass was far deeper rooted than they had anticipated. The Romans spent their 27 years in charge of the NAU trying to find the right balance of integration and autonomy and never quite got there.

In the meantime, Roman officials across the Atlantic continually questioned the wisdom of the operation, with the growing sentiment in Roman circles that the NAU was nothing but a "money pit".

This is the real reason why Erasmus so easily gave up on the NAU and instead went for the far more lucrative Australian lands. Don't be fooled by the rhetoric where Erasmus claimed this deal "corrects a historical wrong" (since Australia used to be a Roman possession before being booted out by England, now a Virtue member, and vice versa for North America)- the Romans saw dwindling value in the overpopulated mess that is North America, so they're more than happy to let Virtue, their archrivals, have a crack at it.

If anyone thinks Virtue is going to be any better handling North America, think again. Looking at their track record in Australia should be enough proof.

Throughout Virtue's 27-year tenure in Australia, the Virtue Protectors- who were supposed to be "peacekeepers"- established themselves as bullies over the entire Australian society, but especially so over Australia's marginalized groups, the Australian Irish and the Aborigines.

Just by its estimate alone, Global Citizens has counted 738 reprisals against Irish or Aborigine communities committed by the Protectors since they arrived in Australia, an average of 27 per year. Those are just the ones GC can verify- the total is much higher.

Furthermore, the Protectors used their legal right to remove the Australian President as leverage on numerous occasions, even though they never had to follow through. In 2002, President Scott Levine resigned rather than bow to pressure by the Protectors to allow British Leyland to build a factory on environmentally sensitive land near Brisbane. Levine's successor- Tom Mullock- immediately allowed the factory to go through.

Then there's the question of Derek Andrews' election to the Presidency in 2018. Virtue's Ensurers certified the results- a resounding 78% of the vote going to Andrews- and claimed there were "no reports of fraud or interference". However, Andrews' opponents documented thousands of cases of voter intimidation (no doubt committed by the Protectors) and faulty voting machines, including reports of pre-registered votes for Andrews.

For those who questioned Barhaven's election to the Presidency, Andrews' story will hit far too close to home- and there's a stronger case of a conspiracy there.

By now, it's an open secret that Virtue uses the "Byzantine flu" strain of the norovirus as a means of keeping its populace in check. It's why the Federation does nothing substantial to get rid of it despite the fact there are now ample treatments that can deal with it.

Treatments they don't want to approve because it means losing control.

Australia is a textbook example of how Virtue uses the Byzantine flu for abusive purposes, usually in the form of "phantom" cases. The real pandemic hit Australia in February 2012, but cases didn't subside until May of 2014, with allegations made that Virtue extended Australia's misery through faulty reporting as a way of executing another round of electioneering. In March 2016, a reported outbreak in Perth just so happened to coincide with Aborigine protests against the construction of a highway through sensitive Aborigine lands. In August of 2017, similar protests by the Irish community were quelled when a reported outbreak just happened to occur the day after the murder of Tommy O'Vincent by Australian police officer Carla Murton. The subsequent lockdown allowed Murton to destroy evidence and eventually escape conviction.

Then there was the most famous "mockdown" of all, when on September 28, 2019, the city of Darwin was ordered shutdown after a reported case. The day before, a group of Torres Strait Islanders had blockaded Darwin's precious ports over fishing regulations, a blockade that might have continued for months had the city not shut down. Despite the fact the patient that produced the case was never identified and that- strangely- no other cases of the Byzantine flu arose out of this case, Darwin had to endure a draconian lockdown until the following February.

Let that sink in.

Let it all sink in.

Because the Virtue Federation are not the heroes you think they are. If you really think they're going to run North America better than the Romans did, think again.

...but, go ahead. Celebrate in the streets. Be happy that the "big bad Romans" are gone from the NAU.

Just be careful of what you wish for.

Posted by Vicendum at 5:59 AM No comments:
Email ThisBlogThis!Share to TwitterShare to FacebookShare to Pinterest
Labels: Artwork

A word on police corruption 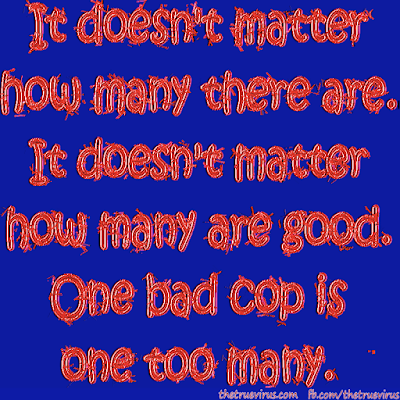 Part of the Vicendum Project. To learn more, read the The Virus eBook collection, available at Payhip.

Posted by Vicendum at 1:45 AM No comments:
Email ThisBlogThis!Share to TwitterShare to FacebookShare to Pinterest
Labels: Artwork

The Limit to Power Is... 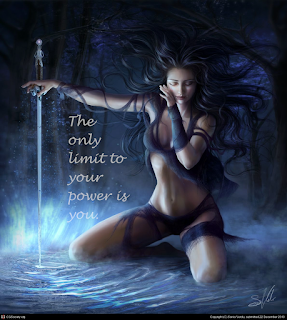 Picture adapted from "Nymph Wars" by Sonia Verdú. To see more of her work, visit http://www.soniaverdu.es/.

The Virus is a part of the Vicendum Project. To learn more, click on "Learn More" at the top of the Facebook page at fb.com/thetruevirus or visit the Payhip page.

Posted by Vicendum at 9:02 PM No comments:
Email ThisBlogThis!Share to TwitterShare to FacebookShare to Pinterest
Labels: Artwork

PREMISE: In an alternate Earth, the Roman Empire soldiers on as the modern day megapower. The rest of the world's nations have united as The Virtue Federation in an attempt to oppose them with limited success.

However, as the two struggle for world supremacy, they leave their people further and further behind. With their governments failing them, the people must to turn to other means to get what they need, with devastating implications for the entire world.

The Virus tells their stories. To read them, read The Virus collection of Vicendum eBooks, available at Payhip.

Posted by Vicendum at 9:19 PM No comments:
Email ThisBlogThis!Share to TwitterShare to FacebookShare to Pinterest
Labels: Artwork 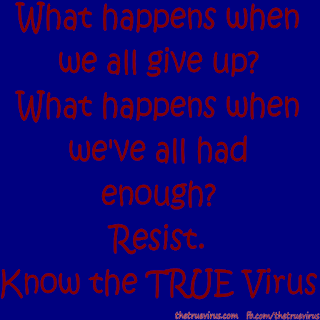 Posted by Vicendum at 12:58 AM No comments:
Email ThisBlogThis!Share to TwitterShare to FacebookShare to Pinterest
Labels: Artwork 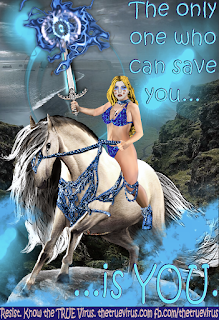 As the crisis worsens and the malaise spreads, the sufferers ask, "when will the politicians save us?"

However, the politicians won't save you because they don't serve you. They only serve themselves.

The only one who can save you is you.

Part of the Vicendum Project. To read more, visit payhip.com/vicendum.

Posted by Vicendum at 6:18 AM No comments:
Email ThisBlogThis!Share to TwitterShare to FacebookShare to Pinterest
Labels: Artwork

A War Is Coming 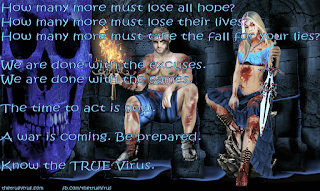 The story of The Virus takes a new turn as the group makes its statement.
Larger version available for purchase on Etsy or Deviantart.
Created with the assistance of the ePic Generator from Overhead Games. Part of the Vicendum project. To read more, visit payhip.com/vicendum
Posted by Vicendum at 5:47 AM No comments:
Email ThisBlogThis!Share to TwitterShare to FacebookShare to Pinterest
Labels: Artwork

What are we saving?

What are we saving? Is it even worth it anymore?

They tell me they're trying to save lives but as the days move on and the pandemic continues with no end in sight, I'm not sure there will be anything left to save.

They tell me to sit tight, have hope and be patient, but the days continue to drag on, the patience withers away until there is none.

I tell them that I'm tired of waiting and I long for my old life to come back.

They tell me to stop being selfish, because what I need doesn't matter. Lives are at stake, so I must sacrifice to save them.

However, I have already sacrificed so much that now, I have nothing else left to give. I have almost lost everything, and the longer this goes on, I will have lost everything.

Do my cries of despair mean nothing?

Must I always continue to bleed, and bleed some more, while those that tell me to bleed do nothing to replenish what I have lost?

How much longer must we carry on, sacrificing...bleeding...waiting?

They tell me it doesn't matter because lives are at stake...but, my life is now at stake. Does my life not matter?

Is my life not worth saving?

Help me, please, let me understand...because you've done nothing for me.

Worse, as the sickened and the dead pile up, it seems you've done nothing to save the lives you claim you want to save.

So tell me, how much longer must this charade go on?

How much longer must we continue living this lie?

What are we saving?

Posted by Vicendum at 6:33 AM No comments:
Email ThisBlogThis!Share to TwitterShare to FacebookShare to Pinterest
Labels: Artwork 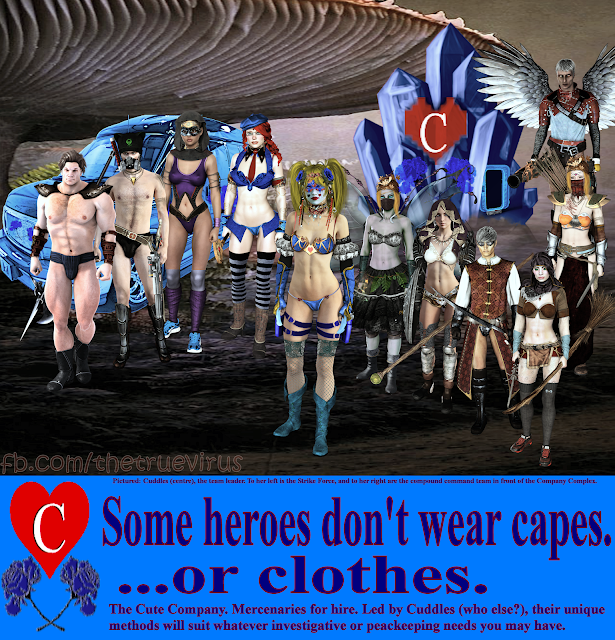 As The Virus takes hold and the world starts to lose faith in conventional policing, a new mercenary group emerges hoping that, once and for all, justice can prevail.

Posted by Vicendum at 5:55 AM No comments:
Email ThisBlogThis!Share to TwitterShare to FacebookShare to Pinterest
Labels: Artwork

If this is the team that's supposed to save the world...we're doomed. 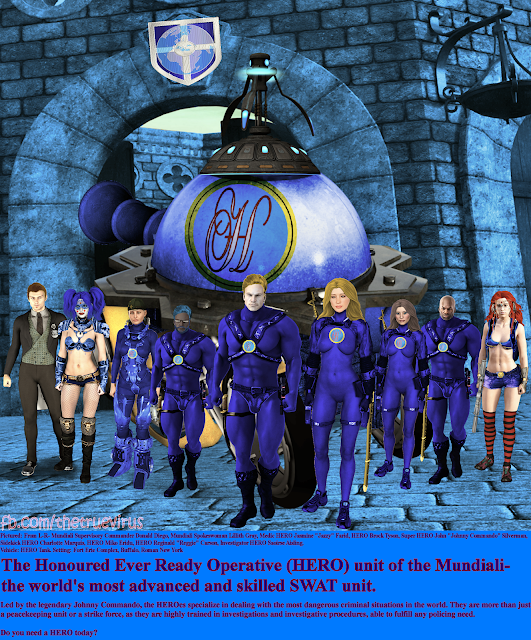 The Virus is a blog containing real-world commentary and artwork from Daniel Arnold, an author based in Toronto, Ontario, Canada.
The artwork contained here is part of a wider story series known as The Vicendum Project, an alternate world/alternate history project that explores the different philosophies regarding politics, society, culture and other aspects of life and asserts there are no right- or wrong- way of doing things. To read more about the Project, visit eBook storefront at Payhip or visit the Wiki.