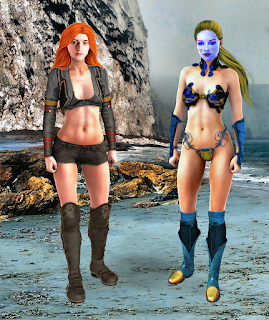 “So who brought the Patty here?” said the blonde, folding her arms and looking directly at Norah.

“Excuse me?” said Norah, her fuse now well blown. “What on Gaia's green earth did you just call me?” Norah raised her fist and was about to start going for blows- with the blonde egging her on- before Prefect of the Watch Roy Fowler got in between both.

“ENOUGH!” hollered Roy, looking at both women with intense anger. “We're not here to fight! We're here to work together! We're on the same team...let's act like it.”

Norah grunted and shook her head, though she wasn't finished addressing the blonde.

“You're lucky he's my boss,” said Norah, wagging her finger at the blonde, “or else I'll shove your head so far up your a** that you'll be able to eat your own sh**!”

The blonde was sure up for the challenge.

“Bring it girl, bring it!” said the blonde, “because I didn't sell my soul to work for the devil.”

Norah walked up to the blonde and placed her hand on the blonde's shoulder, which irritated the blonde.

“You must be Hilda, right?” said Norah with a wry smile as she squeezed the blonde's shoulder intermittently.

The blonde then grabbed Norah's hand and swatted it away like a bug, which elicited a laugh out of Norah.

“Well you got all them rose symbols on ya,” said Norah, pointing things out with her fingers, “and I figure The Order of the Rose would wonder why an Irishwoman would decide to become a cop. Someone who actually works for the police wouldn't question it.”

Hilda let out an awkward chuckle, amazed at Norah's skills. She wasn't going to let Norah “win” so easily though.

“You still haven't answered the question,” said Hilda. “Why did you become a cop? Or, rather, a patrolwoman because the Romans don't have cops and firefighters- they're the same thing.”

“I'm here for police work,” said Norah, “so I'm a policewoman. I don't care what the Romans call it. I think we can both agree they never know what they're doing most of the time...they just make it up all along as they go.”

“I'm of Vandal descent,” she said. “I know all about the Romans and their wackiness.”

“Vandal, eh?” said Norah. “You're the ones with all them 'superheroes' and 'mechawarriors' and stuff.”

“The Spitzenkreiger,” said Hilda. “Yes, that's us...and yes, the Romans co-opted it and claimed they did it better...like they always do.”

“Well,” said Norah with a cheery smile, “the Romans have been stealing things from others for thousands of years...gotta go with what works.”

Hilda heard Norah and stopped in her tracks, but not before letting out a loud, angry huff.

“What is it with you and wanting to meddle with me?” said Hilda, snarling at Norah. “I thought I told you we're not friends!”

“I know,” said Norah, “but you can't just leave the investigation on your own accord...we need you. Or at least I do.”

Norah let out a heavy sigh.

“Hilda,” she said. “These guys are scary good...very sophisticated criminals. We need your thinking on this. Besides, the Order placed a lot of these guys in Hou Rou restaurants...if anyone knows who are the likeliest perpetrators, it's you.”

“Flattery isn't going to get me to go back to the case,” said Hilda, folding her arms and giving Norah a look. “Besides, I know it's all fake...just something for you to say to get me to do your bidding. Well, I'm not falling for it.”

“...and yet you've stood here, talking to me for the past five minutes,” said Norah with a knowing look, “when you could have just continued to walk away.”

Hilda let out a loud huff and threw her hands in the air.

Hilda then began to walk away.

“Why do I care?” she said, shouting at Hilda as tears beginning to form in her eyes. “Because I thought for once you could use someone who actually cared about you for the first time in your life!”

That struck a nerve with Hilda, who lowered her head. She then began to cry, and soon she didn't try to hide it like Norah did. Before Norah knew it, the two of them were locked in an embrace where both of them let their tears flow liberally and often. Norah was shocked at Hilda's show of affection, but she came to appreciate it, embracing the embrace.

The two then positioned themselves so they could look each other in the eyes, though both still held on to each other tightly, This is where Hilda finally opened up.

To read more, read the eBook "Soul of an Empire: Volume 1- Into The Fire" available at Payhip.