The Bikini Army Is A New Low 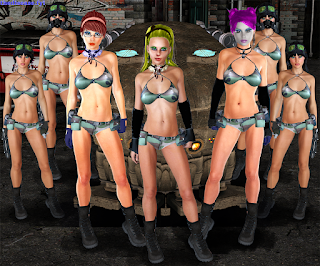 JUST when you thought policing couldn't plumb anymore depths than it already has...it goes and hits a new low.
How low? I think we're scraping by the bottom of the barrel at this point.
Leroy Simms, the Chief Guard of the Virtue Federation and confirmed alleged sexual predator, announced the creation of a new class of agents with the Guards called- and I'm not making this up- the Bikini Army. Simms insists the Bikini Officers will be "fully trained, fully operational law enforcement agents" but he's kidding no one.
The requirements ask that applicants be "women aged 18-29" with their uniforms being those depicted above. The official press release claims that "all body types are welcome" but you'd be kidding yourself if you didn't think the women applying for this will be judged solely on their looks. Look who's hiring them, for one. Further, the press release states that their duties will revolve around photo ops and "community engagement" and makes no mention of the Bikini Officers doing actual police work- or even needing any education in policing for that matter.
In other words, Simms is hiring an army of eye candy. Sheesh.
Why is Simms creating this group? Coming on the heels of the Romans' Optimus program, it's obvious that Virtue wants to create their own PR-motivated "face of policing" to change the public's perception of law enforcement agents as "faceless goons".
Now, while the very idea of "putting a face to policing" is problematic in of itself (and I spare the Romans no amount of criticism for their idea), Virtue's idea is even worse. At least in the Optimus program we can be assured that these are actual, trained law enforcement agents who could be counted on to competently do the job.
The Bikini Army? They're just a group of scantily clad, glorified supermodels whose only job is to be exploited and ogled at by the community they're serving. They're there to appeal to the lowest common denominator, using the cheap tactic of sex appeal to gain eyeballs and fool millions of young boys that if they take up policing, they could meet one of those Officers.
...and if you don't think Officers won't be used for sex and won't use sex themselves then I have oceanfront property I'd like to sell you in Moscow.
Don't get me wrong. I have nothing against women wearing bikinis, women using their sex appeal for profit (or using sex for profit, for that matter) or media and other companies using sex appeal for whatever work they wish to do.
Hey, sex sells- it works and I won't deny that.
The problem is that Virtue is using sex as a means to create a false image of policing and to deflect away from the many problems that exist within the Virtue Guards, not the least of which is rampant sexism and sexual abuse that exists within the organization. The Bikini Army are really there just for the perverse titillation of the powers that be within Virtue, nice shiny objects there to "remind" women within the Federation what their "true worth" really is.
Not only is this sick and appalling in its own right, Virtue presents this as the "future" of policing, as if its figured out the issues inherent in policing and offers this as a "solution".
Well, Virtue, time for some cold, hard, truths.
The Bikini Army are the height (or depth, depending on your view) of cynicism that you can find. It is about an organization that is so far gone that they are not just grasping for straws to find a solution, they're creating clear "non-solutions" and deceiving the people into thinking they're solutions.
Yeah, make policing "hot". That'll ease the public and not make them think about the rampant abuses of power, the corruption, the brutality, the systemic racism, marginalization and sexism that goes on in the Guards' ranks.
"We have hot police officers! Everything's good now!"
Yikes.
Posted by Vicendum at 12:15 AM
Email ThisBlogThis!Share to TwitterShare to FacebookShare to Pinterest
Labels: Archives, Artwork