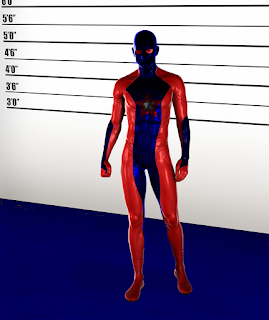 "FIGHT fire with fire", as they say.
Today the Roman Empire announced the creation of the "Optimus" program, a crime fighting initiative that is meant to "provide a face to policing". The core of the program is to train a select group of "elite individuals" to serve as the "spokesperson" for the Watch Patrol in each jurisdiction of the Empire, as well as make public appearances on behalf of the Watch.
When making these public appearances, the Optima will wear individual costumes that will "reflect their personality and the warrior spirit". Caesar Erasmus, holding a press conference outside of the Domus Flavia, didn't elaborate on who will design these costumes, but he did make a point to mention that the wearer will get to provide input on the eventual design, and that "no one will be forced to wear something they don't want to wear."
OK. We'll see about that.
If it sounds like the Romans are creating their own class of "superheroes", then you would be right. That they would come up with this idea shouldn't be much of a surprise- Rome loves to play up their wide array of ancient heroes, with tales that grow more mythological by the day. The Romans are also already heavy investors in the worldwide Spitzenkreiger program, the school of elite mercenary crime fighters whose operatives work mainly in poorer areas of the globe in lieu of actual police departments. Today's announcement, Erasmus insisted, would not end Roman participation in the program but rather create a uniquely "Roman" subdivision of it- one more suited to Rome's specific needs.
While that in itself is striking, most striking of the Optima program is that Rome will allow those with criminal records to apply to participate in it. This caused quite the furour in the press row, as normally anyone with a criminal record is barred from joining a police force, including in Rome. Again, Erasmus did not elaborate on the details, only going as far as stating that criminals whose actions could be deemed "honourable" or "do not indicate they are a danger to society" would be accepted.
Well...isn't that a wrinkle.
There's a lot to dissect here and I have to wonder if it will really work. You have to applaud the Romans for trying to find a viable solution in a world where the very idea of policing is under attack, and rightly so considering we've had far too many cases of police brutality, especially against marginalized peoples. Perhaps "humanizing" the police and moving away from the image of the "faceless force" is a good idea, since the public will more likely put their trust in something they can put a "face" to, and not just a logo.
...and perhaps too, hiring criminals to hunt other criminals will work as well because if anyone knows how crime works and how to stop it, it would be a former criminal. Besides, those on the outside of society are more likely to trust one of their own, plus former criminals would have useful ties to their former lives. It could be a win here.
However, you'd have to question the loyalty of these former criminals, not to mention how much they're truly "past" their prior behaviour. You can't expect someone who's already committed a murder to not do it again, can you?
Then there's the "hero" side of things in general. Will these heroes do actual policing or just stick to public appearances? Erasmus contends they'll actually be involved in investigations and other police work, but you wonder if that will truly be the case. What about when the inevitable happens and the police screw up an investigation or, worse, get involved in another case of brutality or some other kind of scandal? Will the Optima give you honest answers or will they just be robots who engage in "PR-speak"?
Finally, there's the ultimate issue- given all the systemic problems within law enforcement and its various institutions, who have been derided for years and years for their bullying and their gloryhound ways...how does the Optima program solve any of that? Bad policing is still bad policing...putting a "face" to it won't change that. This seems very much like polishing a turd, a "nonsolution" dressed up as a solution designed to deflect from the real issue.
We'll see how it goes. The pilot project starts- where else?- in North America. Good luck with that.
Posted by Vicendum at 4:33 AM
Email ThisBlogThis!Share to TwitterShare to FacebookShare to Pinterest
Labels: Archives, Artwork